FEINDEF, the International Defence and Security Exhibition, held from the 3 rd to the 5 th of November in the IFEMA exhibition centre in Madrid, brought together the biggest companies in the military, defence, security, and protection sector. There were helicopters, armoured vehicles, drones, software companies, military equipment, equipment manufacturers, etc.

Among them was the Madrid-based company Solintal, which just a few months ago started its defence division. The company is traditionally known across the world for the buckets it makes and designs, as well as its repair kits, water bowsers for mine irrigation and supplying fuel to heavy machinery, dump truck hoppers for all kinds of trucks and hauling material, as well as arms and rockers for large diggers.

Even though Solintal has carried out various projects for the military sector over the years, it is not until a few months ago that it created the Solintal Defence Division, an area within the company with a technical office and close to 18,000 m 2 of manufacturing areas, in which to develop and manufacture any kind of tool, element, component, or part that could be needed by any army in the world. Chassis, barges, armour plates, dozer or raker tools, turrets, etc., are part of the different components that Solintal’s Defence Division can develop and manufacture with the highest guarantees and always under the strictest parameters of the most powerful armies in the world.

Solintal Defence Division exhibited for the first time publicly at FEINDEF 2021 with a 27 m 2 stand, at which it showed images of its 18,000 m 2 manufacturing facilities in Algete, Madrid; its technical office with several decades of experience; and physical samples of all the works that the company can make using special steel for the defence sector. The heads of the Defence Division were present throughout the exhibition, as well as the technical director, the manager of the company, and other supporting technicians.

Solintal Defence Division has entered the weapons sector with a strong showing and is set to be a key player for the armies of the world in the coming years. 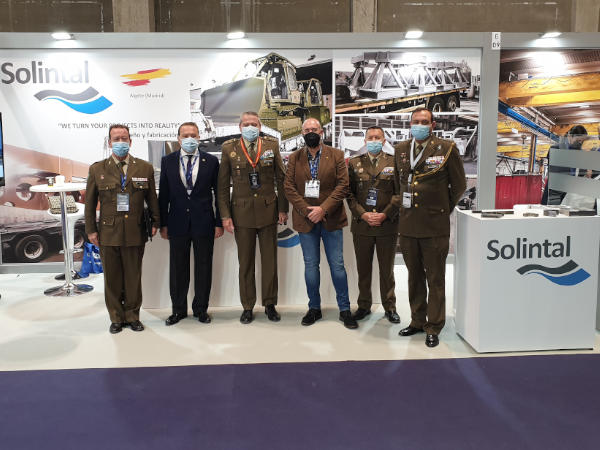 The stand was visited by high commanders of armies from all over the world, as well as the Land Army, Airforce, and Spanish Armada of Spain